Until recently the area known as the Pantanal has been relatively unknown outside of Brazil, but thanks to the improvements in access and the accommodation on offer, the region is now being discovered by the more adventurous travellers with an interest in nature.

Located in the geographical heart of South America, the Pantanal stretches across the states of Mato Grosso and Mato Grosso do Sul and west in to both Bolivia and Paraguay, it covers an area of 75,000 square miles (195,000 sq km), making it the world’s largest wetlands. Cuiabá in the north and Campo Grande and Corumbá in the south are the main gateways to the region.

Covering an area nearly the size of the United Kingdom, the Pantanal, is made up of a collection of ecosystems that house one of the planet’s greatest variety of flora and fauna, including an immense diversity of bird and wildlife. It is thought to have the greatest concentration of animals in the Western Hemisphere and UNESCO has designated parts of the Pantanal as a World Heritage Centre.

Due to its more open vegetation, it is often easier to view wildlife and birdlife in the Pantanal than in the more dense vegetation of the Amazon region. During the rainy season, which runs from November through April, the animals and other wildlife take shelter on the higher ground as the waters rise and flood up to 80% of the plains. In May the waters start to recede, and while the land-based wildlife has more space to spread, the fish and other water born species find themselves corralled in lagoons. Large quantities of over 250 species of fish have been catalogued in the rivers and waters of the Pantanal and are a major attraction for fishermen.

The Guinness Book of Records considers the international fishing festival held each September in Cáceres, close to Cuiabá in the northern Pantanal, as the world’s largest in freshwater with over 3,000 fishermen taking part. 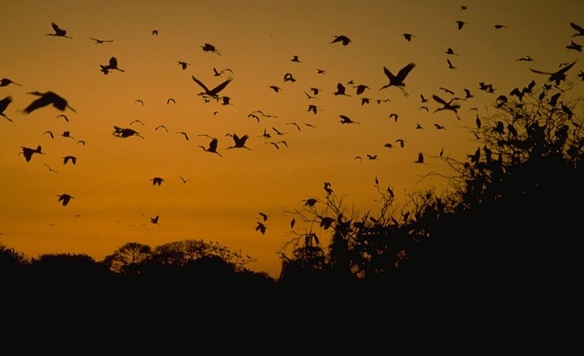 Because of the changing landscape there is debate, even in Brazil, of when it is best to visit the Pantanal. The most popular period for bird watching is June to September, but for those looking for wildlife there is a good reason to go in the rainy season when it is only possible to reach many of the lodges by boat or small plane.

Ramblers head to the west of Cuiabá, to the Chapada dos Guimarães, the canyon and national park that are the geographic centre of South America.

The area around Bonito in the southern Pantanal is also considered an attraction in its own right, with its abundance of waterfalls, caves and crystal clear waters that appeal to divers and snorkelers who can explore this natural aquarium in person.

Cuiabá was one of the host cities of the 2014 World Cup.