Ticket prices for the Rio 2016 Olympic Games have been announced – and more than half of them will be sold at accessible prices in order to ensure that the event is open to everyone. About 7.5 million tickets will be issued and approximately 3.8 million of these will be available for 70 Brazilian reais (US$30) or less. For the price ranges (in Brazilian reais) for all sports and ceremonies CLICK HERE. Or click on the images below.

There will be tickets for 717 sports sessions, covering all 28 Olympic sports, plus the opening and closing ceremonies. The range of prices the organizers say is designed to make tickets as affordable as possible, with the goal of ensuring that the local Brazilian population has the opportunity to attend events. The cheapest ticket will be priced at 40 Brazilian reais (less than US$20).

The full Rio 2016 Olympic Games Ticket Sales Programme will be unveiled in November 2014, along with the competition schedule and details on how the public can buy tickets.
The next step on the spectator’s journey towards participating in the first Olympic Games to be staged in South America will come in November. Fans from all over the world will be able to register on the ticket sales website and indicate which sports are of  interest to them. They will then receive tailored news and information on these sports and athletes, as well as other events around the Games, as anticipation builds towards 2016. 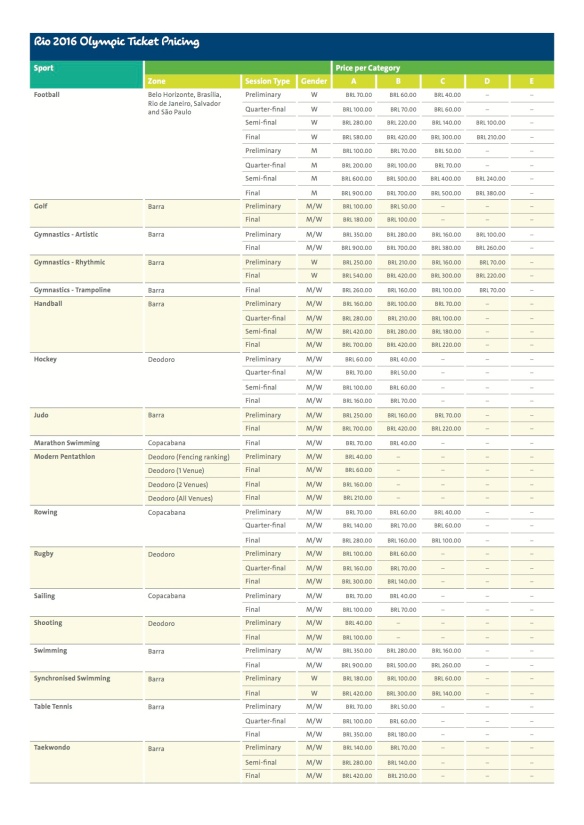