75 teams tried to qualify for Mexico, but only 16 could take part in four groups of four in the qualifying stage of the finals, with the top two from each group going into the quarterfinals. It was the first World Cup held outside South America and Europe; the first to be televised in colour; substitutes were allowed for the first time; and red and yellow cards were introduced, although no player was sent off during the tournament. Brazil was drawn in Group 3 with holders England, Romania and Czechoslovakia.

Wednesday, 3 June 1970, saw four group games at the FIFA World Cup in Mexico including the tournament debut of Brazil against Czechoslovakia. Czechoslovakia scored first, but Brazil went on to win the match 4-1 thanks to goals by Rivelino, Pele and two from Jairzinho. 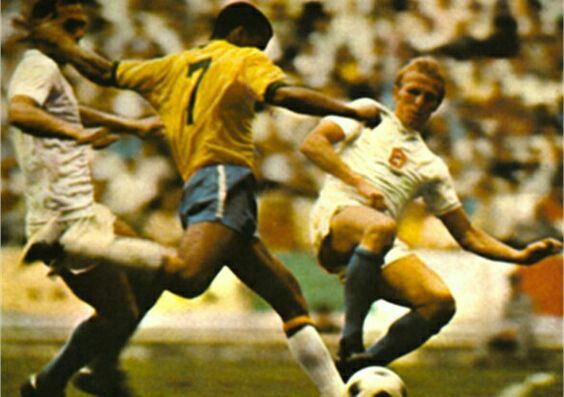 On Sunday, June 7 1970, one of the greatest games in World Cup history was played in Guadalajara between Brazil and England. Brazil won the game one-nil, Jairzinho scoring. Either side could have won, and it would not have been unfair if it had ended 4-4. Gordon Banks made his famous save from Pele, and made a number of other key saves to keep Brazil out, while Bobby Moore played possibly his greatest game in defence. At the other end Felix proved he had more lives than many cats, while it was Brazil’s captain, Carlos Alberto, who had to do a lot of the tidying up. The result meant both team were favourites to progress from Group 3. 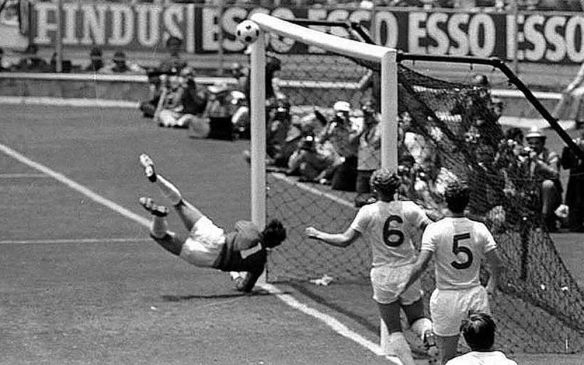 The third and final round of the group stage of the World Cup took place on Wednesday, 10 June. Brazil defeated Romania three-two to guarantee its place in the quarter finals and top its group. Pele scored twice for Brazil and, of course, Jairzinho netted one.

On Sunday, 14 June 1970, all four quarter final matches of the 1970 FIFA World Cup were played. Producing some classic games, West Germany, the only unbeaten side in the tournament along with Brazil, beat the holders, England, three-two after extra time in a rematch of the 1966 final. The hosts, Mexico, were beaten 4-1 by an Italian side coming into form, while it took Uruguay to the 117th minute and extra time to score the one goal that sent the Soviet Union home. The fourth quarter final saw Brazil beat fellow South Americans, Peru, four-two thanks to goals by Rivellino, Jairzinho, and two from Tostao.

The two semi-finals were played on Wednesday, 17 June, with Brazil facing Uruguay in and all South American semi-final while the other was an all European affair with Italy taking on West Germany. All the semi-finalists were past winners of the World Cup, Brazil, Italy and Uruguay having won it twice, and West Germany once. The only other country to win the World Cup was England. Brazil overcame Uruguay three-one, Uruguay scored first before goals from Clodoaldo, Jairzinho and Rivelino saw Brazil safely through to its fourth final.

The second semi-final is considered a World Cup classic with Italy finally overcoming West Germany four-three after extra time. Full time had ended one-one with Germany scoring in the final minute of normal time, before five goals were scored in extra time. Germany would beat Uruguay one-nil in the third place play off.

The final on Sunday 21 June in front of 107,412 fans at the Azteca Stadium in Mexico City saw two-time champions Brazil and Italy playing, the winner knowing they would get to keep the Jules Rimet trophy as three time winners. Brazil scored first through Pele, before Italy equalised to end the first half at one-one, but the second half was all Brazil in an exhilarating exhibition of attacking football. Gerson put Brazil ahead in the 21st minute, with Jairzinho scoring in the 26th minute to be the only player to score in every round and match of a World Cup. The icing on the cake was the final goal scored by the Brazilian captain, Carlos Alberto, after nearly every Brazilian player had touched the ball as they took it from deep in their half to score. The goal is generally considered the best scored in World Cup history and for many that Brazilian team is considered the greatest team ever.